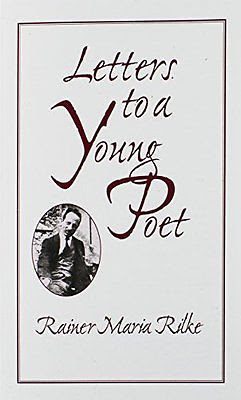 Rainer Maria Rilke’s Letters to a Young Poet were, and still are, a tremendous gift – an outpouring of wisdom and affection towards aspiring poet Franz Kappus as he struggled to reconcile his desire for a creative life with the necessities of making a living; and a gift, over a century later, to this not-so-young aspiring poet, as I too struggled to reconcile my need for creativity with my duties to the world. In Letters, Rilke speaks passionately about creativity, spirituality, love, solitude, and of that which is deepest in us, that which is ‘inexpressible, and takes place in a sphere that no word has ever entered.’

As would-be poets go, Herr Kappus and I were, in many ways, standing at opposite ends of the same journey. On writing to Rilke for advice, the 19-year-old cadet was deciding between the life of an artist and that of an officer; on first reading Letters, I had already thrown myself into the life of wife and mother, and was now looking to rediscover the writer I always felt I was. 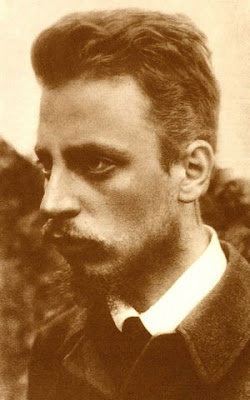 Poetry came to me late and unexpectedly. I had always written, but now with three young children to care for, my hands were, quite literally, too full to pick up a pen – and so I hatched a plan. I would compose verse in my head (my memory was too poor to compose anything longer!) rolling it around in my mind as I hung out the washing or stirred the soup, gestating words until the moment came – late at night–  to give birth to a poem.

Yet what began as a pragmatic choice soon flared into a passion. Unlike prose, with poetry, I felt no need to labour over plot, character or word-count; it was a form of expression that seemed to speak directly to, and from, the soul. And while I had always been a voracious reader, with new-found desire I now devoured poetry, and in doing so came upon Rilke’s words:

The whole thing is to carry the (poem) full time and then give birth; to let every     impression and every germ of a feeling consummate itself entirely within itself, in that which is dark, inexpressible, unconscious and unattainable by your own intelligence,     and to await the hour of the delivery of a new clearness of vision. That alone is to live an artistic life, in understanding, as in creating.


Good heavens, I thought, Rilke was talking about – and to – me! Here was a poet who did not distinguish between the ordinariness of everyday life and art: ‘No need to separate art from life, as Art, too, is only a form of life and by living in no matter what way one can be unconsciously preparing oneself for it’. Instead, Rilke trusted in the directness and simplicity of nature and human relationships to feed his creative flame. He exhorted his protégé not to ‘be led astray by the surface of things’ but to ‘only be attentive to that which rises up within you, and place it above everything that you see around you’. Well, this I could do, and without leaving home. Liberation!

Furthermore (and quite incredibly for a man of his era) Rilke felt that women were better placed than men to plumb these creative depths, believing they ‘must at bottom have become richer beings, more ideally human beings than fundamentally easy-going man, who is not drawn down beneath the surface of life by the difficulty of bearing bodily fruit’.

Of course this sounds rather old-fashioned (it was written, after all, in 1904) but it didn’t to me at the time, since I was indeed engaged in the earthy business of ‘bearing bodily fruit’ and could attest to its power to ‘draw me down beneath the surface’ into closer connection with ‘nature… the simple and small in her’ and away from the distracting ‘claims of the many things which talk and chatter’. Which is not to say that men and women cannot equally access these depths, but only to say that, as an isolated mother of three young children scribbling away in the suburbs, these words held great power for me and lent me confidence to trust my own instincts and abilities.

In Letters, Rilke took great pains to impress upon the lonely Herr Kappus the importance of solitude (I had little chance of that!) and suffering (never in short supply), believing them to be art’s – and life’s – greatest teachers. He urged Franz to bear his ‘griefs’ gladly, for these ‘are the moments when something new, something unknown enters into us.’ As a Buddhist practitioner and as a human being I knew this to be true; now, as a poet, I was discovering it anew. The poems which invariably moved me as a reader seemed to shoot straight from a deep, wordless space of suffering and growth inside the poet; and my own poems, when I found time to dash them off, were springing from the same space. A complex emotional nexus of suffering, creativity and transformation was occurring for me exactly as Rilke described it. At such moments, he explained:

Our feelings are dumb with embarrassed shyness and everything in us retreats into the background. A stillness grows up, and the new thing, that nobody knows, stands in the middle of it and is silent. I believe that nearly all our griefs are moments of suspense,     which we experience as paralysis, because we can no longer hear our estranged feelings living. Because we are alone with that foreign thing, which has entered into us…we are in the midst of a state of transition, in which we cannot remain…The new thing in us, that which has been added to us, has entered into our heart and penetrated to its innermost chamber, and is no longer there even—it is already in our blood.


These words left me paralysed, yet at the same time some wordless intelligence inside me stirred, and I felt a heightened sense of interconnection. In my experience, this is the effect of all great poetry, of all great art – a feeling of stillness and acute awareness, as if a gong has been struck deep in your soul, the reverberations causing something in you to start, shift, and quicken. If, at such moments, we can express ourselves authentically and skilfully, I believe we have the power to create similar transformations in the mind of the reader. Sometimes creativity of this calibre springs from grief, sometimes from joy, but always from deep awareness. As Rilke advised the young poet when asked to critique his creative expression: ‘Nobody can advise you and help you, nobody. There is only one way. Go into yourself.’

Notes:
All quotes from Letters to a Young Poet by Rainer Maria Rilke, translated by M.D. Herter Norton.

Michele Seminara is the author of the recently released collection of poetry, Engraft. She is the managing editor of Verity La.You can buy copies of Michele's book and read more about her at her blog.